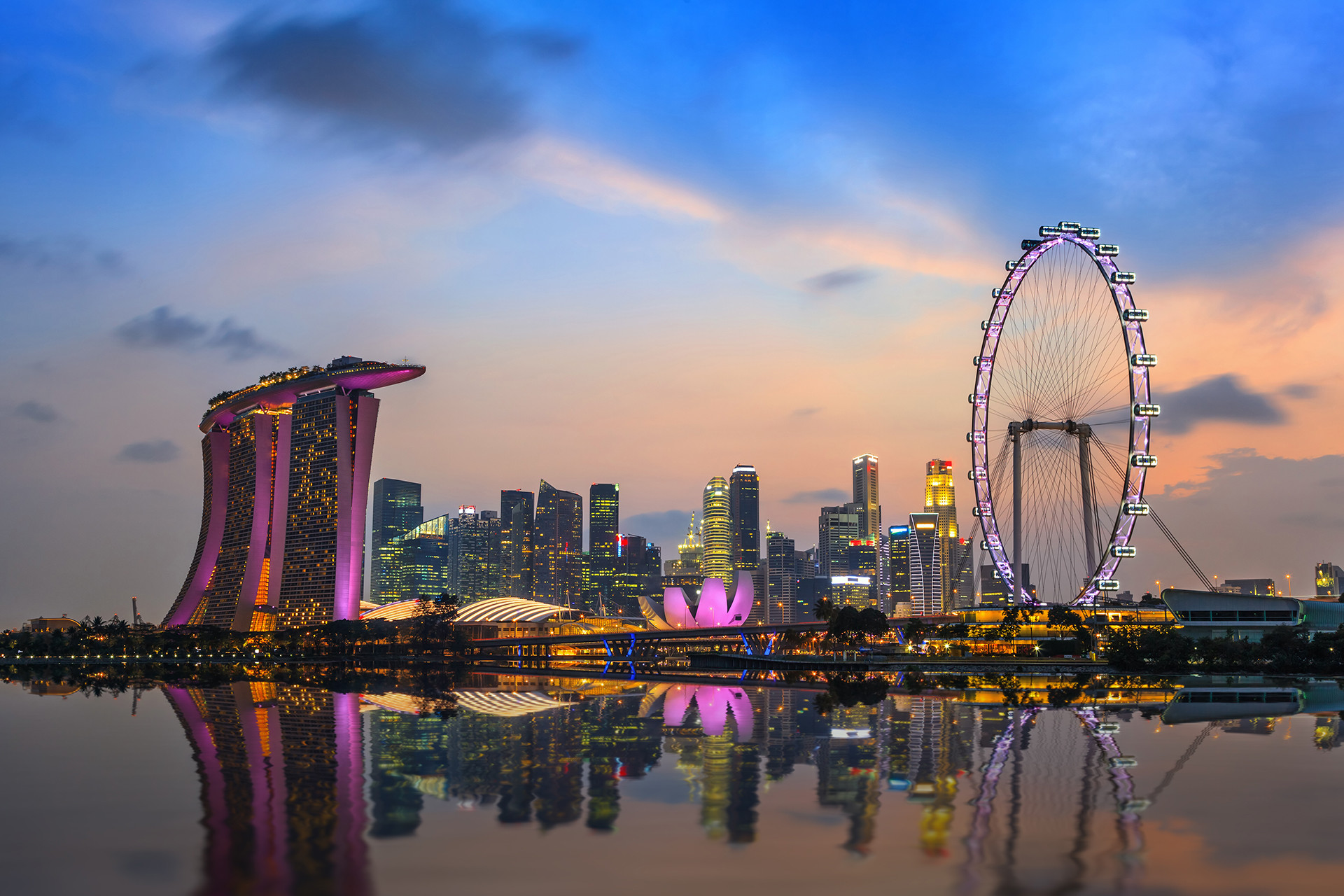 If your understanding of honeymooning isn’t spending lazy days on the beach and eating at the open buffet during your entire honeymoon, maybe you would love the idea of exploring urban honeymoon destinations. Asia is home to some of the most vibrant and colorful cities in the world which are perfect places to create unforgettable memories.

After months of stressful wedding planning, you deserve to have some romantic time with your partner. And what would be more romantic than exploring a whole new world with your other half?

In this blog post, we listed the top 10 urban honeymoon destinations in Asia where you’ll never run out of things to do and start your new life with amazing memories. Making this list was very hard because each major city in Asia has its own unique charm and character. When we are making the list we choose the ones that would be suitable for a honeymoon escape with plenty of attractions.

Most people wouldn’t consider Seoul as an ideal honeymoon destination. However, this city is surprisingly a great place for an urban honeymoon getaway. After the global success of K-Pop music and the Korean pop culture, Seoul has become one of the most popular cities in Asia. But you don’t have to be a K-POP fan to appreciate the beauty of this city. Seoul is the capital of South Korea and the biggest city in the country. From serene temples to bustling shopping districts and royal palaces to endless street food vendors; Seoul is a destination that has plenty of attractions.

With a history of 3000 years, Beijing is the cultural and political center of China. It has continuously been the capital of China for the last 700 years. Six ancient dynasties were ruled from this amazing city and they all left their marks with stunning landmarks and architectural masterpieces. If you and your partner are history buffs, your honeymoon in Beijing is going to be unforgettable. Beijing is home to numerous historical sites which are all magnificent. Seven of those sights are listed as UNESCO World Heritage Sites, which are; the Forbidden City, Temple of Heaven, Summer Palace, Ming Tombs, Zhoukoudian , the Great Wall and the Grand Canal. Another reason to visit Beijing is that you can try as many authentic Chinese foods as you want. The Chinese dishes you are going to eat in Beijing are nothing like the food you ordered from your local Chinese restaurant back home.

Although Dubai is not your typical Asian city, technically it is located on the continent of Asia and it is an amazing honeymoon destination. In the last 30 years, Dubai has transformed itself into one of the most visited tourism destinations in the world. Thanks to the luxurious five-star (and even six and seven star) hotels and plenty of attractions in the city, Dubai has become a popular choice for honeymoon couples too. Unlike many other urban honeymoon destinations, Dubai is home to stunning golden sand beaches. You can enjoy a sunny day on the beach in the morning and explore the shopping and dining venues at night. If you are going to visit Dubai for your honeymoon, we suggest you to leave the city behind for a day and go on a desert safari and experience the tranquility of endless desert.

The city of Istanbul was once the capital of 2 of the biggest empires in the history. Today, it is by far the biggest and most important city in the Republic of Turkey. The unique location of the city positioned between the continents of Asia and Europe makes Istanbul a bridge both literally and culturally. Istanbul is home to some of the most beautiful landmarks in the world such as the Hagia Sophia, the Blue Mosque, Galata Tower, Topkapı Palace and so on. Exploring these ancient masterpieces would be an unforgettable memory for your honeymoon.

If you want to buy some souvenirs in Istanbul, you can visit the oldest shopping mall in the world which is called the Grand Bazaar. With 61 covered streets and over 4.000 shops, the Grand Bazaar is truly a treasure-hunter’s paradise. From jewelry to delicious Turkish sweets and hand-knotted rugs to hundred different kinds of spices; the Grand Bazaar offers thousands of merchandise for every budget. Last but not least, Istanbul is heaven for foodie couples where you can taste best examples of the world famous Turkish cuisine.

Hanoi is the capital of Vietnam and the second biggest city in the country. Hanoi is a city where you can observe the Sino-Vietnamese culture blended with French influences. In addition to historic buildings and temples, Hanoi is also a known for its thriving nightlife and vibrant shopping districts. If you want to explore the streets of Hanoi, you can visit the night market where you can taste variety of delicious street foods and hunt for bargains. In terms of natural attractions, the world famous natural wonder called the Ha Long Bay and the Ba Vi National Park are waiting for you. Located near Hanoi, both of these two natural wonders will give you the thrill and adventure that you are seeking.

You might think that Hong Kong is just a skyscraper forest which does not offer anything fun to do but you’d definitely be wrong. It goes without saying that Hong Kong is one of coolest cities in the world not just in Asia. There are plenty of things to do and places to explore in Hong Kong that are perfect for a honeymoon itinerary.

First of all, Hong Kong is home to gorgeous beaches and national parks where you can relax and recharge yourself. Secondly, the nightlife scene in Hong Kong is incredibly diverse and vibrant. From Michelin-rated Restaurants to rooftop bars and packed nightclubs, you can easily find something for your taste in this city that never sleeps. Going on a night cruise in the stunning Victoria Harbour is a must do activity for couples who are seeking a romantic experience. In addition cultural sights and cool shopping districts, Hong Kong is also home to several theme parks for thrill-seeking couples.

Kuala Lumpur, which is the bustling capital city of Malaysia, offers more than you can expect from a modern city. This city is home to world famous temples, caves and lots of landmarks waiting to be explored. Kuala Lumpur is the cultural and financial center of Malaysia. It is also one of the most important cities in the entire continent of Asia. It is one of the most cosmopolitan cities in the world. As most of the destinations in our list, Kuala Lumpur is a city that never sleeps. From modern shopping malls to street markets and coolest nightclubs to street food vendors, there are plenty of things to experience in Kula Lumpur during day and night.

Bangkok is the most visited city in the world with 22.78 million visitors in 2019. This massive popularity of Bangkok is a well-deserved one. Bangkok is one of the most unique entertainment capitals in the world. Famous for its vivid nightlife, delicious Thai cuisine, massive markets and all kinds of affordable luxuries; Bangkok is one of the bucket list destinations. The city is also home to stunning temples, palaces and museums that you shouldn’t miss. If you want to explore a chaotic yet charming part of the city, you can head to Bangkok’s Chinatown. Founded in 1782, Bangkok Chinatown is the largest Chinatown in the world and definitely one of the best ones.

The Lion City is known for its modern and vibrant urban atmosphere as one of the biggest finance centers in Asia. However, Singapore offers a lot more than many other cities in the world; thanks to its natural and manmade attractions. It is one the best urban honeymoon destinations, full of luxurious hotels and resorts where you can spoil yourself with your other half. There are endless options for dining, shopping and partying within Singapore. Whether you want to eat delicious meals for under $10 in one of the Hawker Centers or have a date night in one of the swankiest rooftop bars, Singapore got you covered.

The most popular attraction in Singapore for couples these days is the Infinity Pool at the Sands SkyPark in Marina Bay Sands Hotel. Visiting this amazing pool, watching the stunning skyline of Singapore and taking a few selfies for Instagram is a dream for every honeymoon couple.

Japan has always been one of the all time favorite countries for globetrotters and its capital city Tokyo is a separate world itself. We’ve actually wrote a separate blog post before called: “Why Japan is a great honeymoon destination?“. Japan is unique destination that maintains a perfect balance between the modern life and thousands of years of history, culture and traditions. You can observe this balance in every corner of Tokyo.


There are many things to do in Tokyo. For starters; discovering the parks, temples, shrines, museums, the Imperial Palace and its gardens are most touristy things to do in Tokyo. However, depending on your own taste and interests you can create your own itinerary. Foodies, anime and manga lovers, gamers and Kawaii Culture fans can all have an awesome holiday in Tokyo, thanks to the abundance of attractions serving for their interests.

If you have any questions or suggestions for us, please send an e-mail to the e-mail address below:

Back to Top
Close